I loooove watching Korean dramas. And I equally love learning Korean through them. I hunt down transcripts (or scripts if transcripts are not available) of my most favorite dramas and read them as I re-watch or as I listen to the episodes. Yes, I listen to the episodes. Some people would listen to K-pop or Korean radio program or podcast either as a hobby or in the background while doing something else. I’m not into K-pop (or music in general) so I easily get bored when listening to songs and Korean radios and podcasts are still too difficult for me. So I often prefer listening to Korean dramas instead. Of course, if I have time it’s better to re-watch the dramas properly (and with 한글 subtitles as much as possible, instead of just a pdf file or a printed script – though I also like the later because you can write down notes as you go along). But since I rarely have enough free time, I listen to my favorite dramas instead – while doing something else, or while commuting.

Anyway, a good blogger friend, meloncreme, asked if I can send her my drama audio files and scripts. Since to be able to send them to her I’ll be uploading them all anyway, I decided to post them all up in my blog too (in case there’s anyone who would actually want them??? XD).

MY NAME IS KIM SAM SOON 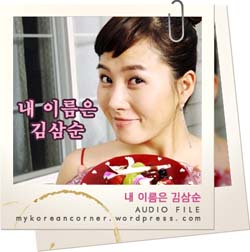 SCENT OF A WOMAN 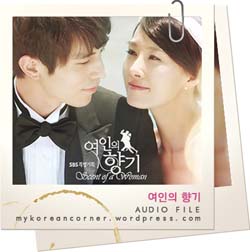 Scent Of A Woman Transcript (pdf)

Sorry I don’t take requests. Although it’s easy to extract audios and find transcripts/scripts; compiling, compressing and uploading takes time (and that’s something that I don’t have). Here are some quick tutorials instead:

Where to find Korean Drama Scripts*?

Where to find Korean Drama Transcripts**?

How to open hwp files?

How do I extract drama audios?

DISCLAIMER: Drama audio files and scripts/transcripts/subtitles are my personal compilation from various open internet sources. Feel free to download for personal use only. No copyright infringement intended.

*Scripts – actual script submitted by the writer that includes sequence numbers and scene descriptions. It may not be the final version therefore there are still sequences and dialogues that may not be included in the drama anymore and the dialogues may not be exactly how it was said in the drama.

WHY I LIKE READING SCRIPTS: It’s exciting to know what the writer’s original idea and it’s fun to imagine how deleted scenes would turn out if they were not edited out. It’s also fun to find out who among the actors follow their script word for word (usually the extras) and who loves throwing adlibs every now and then. It’s also easy to locate specific parts since the name of the characters are included. Scripts can also be read on its own.

WHY I DON’T LIKE SCRIPTS: It’s difficult to search dialogues by typing a word that you hear and using Ctrl+F since it’s not exactly how it was said in the drama. It’s also impossible to use it to make Korean subtitles for the same reason (unless one has a really good command of Korean already and can edit the lines one by one according to how they were spoken).

** Transcripts – are done after the drama was aired and are exact transcriptions of what the actors were saying.

WHY I LIKE TRANSCRIPTS: Since they are exactly what the actors said, it’s easy to follow. It’s easy to use the Ctrl+F function when locating particular scenes. Can be used to create Korean subtitles.

WHY I DON’T LIKE TRANSCRIPTS: You can’t read it on its own since it’ll be difficult to figure out who’s talking. Difficult to find.