We arrived at the airport a few minutes past 4PM. The taxi driver, maybe because we declined to give him a big tip, told us that flights to Korea are only at 4PM and mornings. If what he said was true, then it’s not impossible that they have boarded the 4PM flight, if they left the hotel at 2PM. 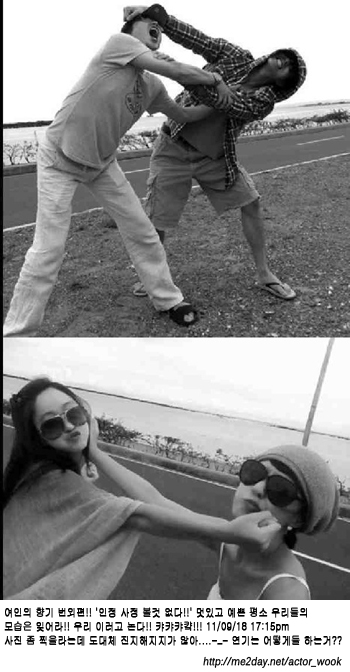 If these photos were taken real-time, there is no way that they can be in the airport ahead of us. If these were taken earlier and were just uploaded by Lee Dong Wook, we can only be sure that they are not on the plane yet since he can still use the internet on his phone. But they could be inside the boarding area.

We tried looking for flight schedules from Cebu to Korea in the internet. Maybe since Cebu is very popular among Koreans and there are a lot of Koreans residing in Cebu now, there were LOTS of flights from Cebu to Korea. Almost every 30 minutes. How on earth can we know which among those dozens of flight they are going to take? We don’t even know which airline they are taking (though we were guessing it’s Korean Air or Asiana).

And waiting certainly is very difficult. Especially if you are waiting for nothing.

There were 3 possibilities. (1) They could’ve left already. (2) Their flight will be that night. Or (3) their flight will the following day. And I was dreading the last one. If they already left, then it’s too bad we missed them but at least we tried. If they will leave that night, then lucky us, we’ll get to see them. But if they will leave the following day, I don’t think I have the energy to wait for them the entire day in the airport. I am already very tired, physically and emotionally. And wennah have to leave early the following morning, so if it’s the last one, I’ll have to wait for them alone in the airport.

We gathered and analyzed all the information we received. I even made a chart and tallied them on a paper (nerdy me!).

I thought at first that 3nights 5 days is kinda weird. I showed it to my Korean friend and she says it’s not weird. She had a difficult time explaining it to me, but she said there’s a “null night” or something in which you won’t do anything on that night.

Someone said their shuttle left at 3pm and probably went to a shopping mall.
Someone said they checked out at 2pm and we can still try catching them at the airport for their night flight.

We believed the second person.

We thought that if they left at 2pm, they might not have gone to the shopping mall and may have caught the 4pm flight. We were too late then because we arrived at the airport a few minutes past 4:00pm.

But we were told TONIGHT. Not this afternoon.

We tried figuring out the 3nights 5 days first. They left on the 15th and although the flight is at 8pm, they were at the airport at 5pm and probably have not worked the entire day to prepare for the trip (1 DAY), they arrived 15th night in Cebu (1NIGHT), 16th they spent a day in Cebu (2 DAY), 16th they spent a night (2 NIGHT), 17th they spent another day in Cebu (3DAY) and another night (3NIGHT), then 18th they spent another day in cebu (4DAY), but checked out at 2 in the afternoon. They can go to the airport then on the same day 18th and take the night flight, but since they won’t spend the night in Cebu, it may not be counted as 4NIGHT. But if they leave on a late flight on the 18th, they will arrive in Korea by the 19th and would probably spent a day resting (5DAY). Thus the missing night.

With the 3 possibilities we came up with, for number 1 the supporting claims were:
– they left at 2pm in the hotel
– (but cab driver lied about the flights. we checked and there were lots of flights to Korea that night)
TOTAL +1

For number 2 the supporting claims were:
– 3N5D makes sense now
– they can still arrive in Korea on the 19th, if they take a flight from 8pm onwards (we are an hour behind and the travel time is 3.5hrs)
– the helpful someone looks very sincere when he told us their flight is tonight (TONIGHT and not this afternoon.
– someone from the airport said that there are still flights to Korea at 1:20ish am.
– their me2day post showing them playing on the seaside (about 30mins before me and wenna was in the airport – so there’s no way that they’ve beaten us to the airport. me2day, most of the time, are real time photos. me2day means what is “me” doing “today”, thus me2day.
– they could have checked out, then went to a shopping mall, had dinner, then go to the airport. if they are going somewhere else to tour and will take a flight on the 19th, then they shouldn’t have checked out yet.

For number 3 the supporting claims were:
– 19 is what the news said (on second thought the news said they will be back in Korea by the 19th – not they will leave cebu by the 19th)
– they could have gone on a different trip, maybe Bohol and will stay there for a day.. or Manila
–  (but he looks really sincere)

We just hold onto the fact that there is a higher probability that they will leave that night.

Then at 8PM we realized that not all flights to Korea are direct flights!!! We had been staying at the International departure area all those time. But if they took a flight with a connecting flight to Manila, then they will be at the Domestic departure. My heart sank with the possibility that we might have missed them (yet again!). But Wenna said it’s impossible that we missed them because we have been looking at every coaster and vans that are passing by. Any vehicle going to the Domestic departure area will have to pass by in front of the International Departure area anyway.

Since we have to monitor 2 areas, I decided to ask the airport staff regarding international flight schedules. She told us that the next set of direct flights to Korea will be around 1:20AM.

So we decided to go out and check the Domestic departures. We found in the internet that there are also several flight to Korea with a connecting flight to Manila during those hours. Afraid not to miss those who will be coming to the International departure too (since what the airport staff told us may not be accurate), we decided to just wait outside the airport, near the International departure.

We found some seats on the sidewalk. We sat there for hours. We check the internet once in a while. And me and wennah were able to talk about almost everything that we can talk about. And we continued waiting, waiting and waiting…

I often lose my temper too for no reason. And tears have found their way in my eyes (but I didn’t show it to Wenna). I was not crying because we might not see them. I knew it right from the start. Nothing is sure about our trip in Cebu. We even went there without any plans, right? If we can meet them, then good. If not, then it’s ok.

Even if we were not doing anything and just sitting, I feel that it was the most difficult time. We were both very tired too. How much longer should we wait? We don’t know. Will they still come? We also don’t know.

That time I really really really wanted to give up. If only I have money then, I would really hop on the next flight back to Manila, go home, and lie down on my bed.

We have almost memorized all the coasters and vans from different hotels, resorts and tour groups since we look at every vehicle that stops by. And strangely, none of them looks the same with the coaster they are riding one on their photos. There was even a time when I stood side by side a van, holding my netbook up and comparing the seat covers on their me2day uploaded photos to the van’s seat.

Are they really riding a coaster? Could it be a van?

At around 11pm, a certain giant bus appeared and stopped right in front of us. And the seats on the bus were EXACTLY THE SAME as the seats on the photos they posted in me2day. My heart started beating fast! Automatically, our eyes darted to the last couple of seats at the rear of the bus.